Tips on Having a Gay (Ex) Boyfriend by Carrie Jones 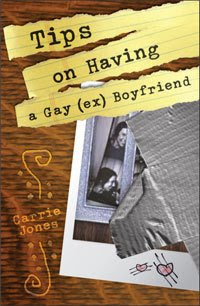 Score: 4.5/5
Summary: Belle believes that Dylan is the one that she'll marry, but one day, Dylan tells her that he is gay. Belle wonders where does this leave her. Dylan and her have been best friends since they were little in their little town in Maine. Since they started dating, Belle has been known as Dylan's girlfriend or the other half of their couple hood.
Belle and her other best friend, Emily decide that she can only have a week to cry, because she doesn't want to become like Mallory. As the week goes on, Belle finds a possible relationship in a guy that she least suspects and it turns out that he has liked for her for a long time. Bella also finds that having a gay ex-boyfriend isn't so so easy. She starts to find that both her and Dylan are getting harassed. This story is original and amazing.

Notes: If you haven't read this, go pick this up and get somewhere comfortable. It is a fairly short, yet amazing read. The characters are really amazing and well developed. I could relate to them. This is amazing for a debut novel and I need to get Carrie Jones' other books, as soon as possible. If you like Audrey, Wait! by Robin Benway, you will probably like this and vice versa. The characters are both getting attention for past relationships and it has similar humor.
Posted by Sarah Woodard at 10:08 PM