Source: Publisher
Celia Reynolds is the youngest in a set of triplets and the one with the least valuable power. Anne can see the future, and Jane can see the present, but all Celia can see is the past. And the past seems so insignificant -- until Celia meets Lo.Lo doesn't know who she is. Or who she was. Once a human, she is now almost entirely a creature of the sea -- a nymph, an ocean girl, a mermaid -- all terms too pretty for the soulless monster she knows she's becoming. Lo clings to shreds of her former self, fighting to remember her past, even as she's tempted to embrace her dark immortality.When a handsome boy named Jude falls off a pier and into the ocean, Celia and Lo work together to rescue him from the waves. The two form a friendship, but soon they find themselves competing for Jude's affection. Lo wants more than that, though. According to the ocean girls, there's only one way for Lo to earn back her humanity. She must persuade a mortal to love her . . . and steal his soul.
I love this series. Pearce creates such dark,  but complicated retellings of fairy tales and I just need more. Celia was such a sweet character and I understood her character a lot. Her sisters were harder to understand, but I still found them to be entertaining. I liked how they blended together, because sisters tend to be very similar yet slightly distinct. I like Lo too. The romance in the story was beautiful and I liked that Pearce made the plot surprising and enjoyable. The plot drew me in and enchanted me into wanting to read more.  I find her originality to be amazing and the story was well crafted as a result. Pearce crafts another beautiful retelling of a fairy tale and I can't wait to read more books along this way. If you have enjoyed her other books, you must read this one now. It is very similar to Sisters Red and Sweetly and dives deeper into the story.

The Truth About Alice by Jennifer Mathieu

Everyone has a lot to say about Alice Franklin, and it’s stopped mattering whether it’s true. The rumors started at a party when Alice supposedly had sex with two guys in one night. When school starts everyone almost forgets about Alice until one of those guys, super-popular Brandon, dies in a car wreck that was allegedly all Alice’s fault. Now the only friend she has is a boy who may be the only other person who knows the truth, but is too afraid to admit it. Told from the perspectives of popular girl Elaine, football star Josh, former outcast Kelsie, and shy genius Kurt, we see how everyone has a motive to bring – and keep – Alice down.
I found The Truth about Alice gave a very interesting point of view, because of the diverse cast of characters. I felt like the characters had a very journalistic and documentary feel  to them. The reveal of the manipulation of rumors and people presented both a realistic point of view. I slowly balanced my like and hatred of characters with the reveal of each aspect of the characters. I wish that some of them had a bit more dimension, because they approached it, but didn't quite accomplish it. Like Kelsie, for example, annoyed me so much, and I felt with her, but I didn't understand all of her motives.
The plot was paced very well and I read it fairly quick. It addresses a lot of major issues within high school, such as bullying, slut-shaming, and among others. I found the multiple point of view created a great overview of what was happening It was a very short and fast read that I enjoyed. Most books usually focus on the victims of bullying and I found the switch of that to be original. The writing made a good passage of time and created a unique book. Overall, if you want a book that feels like a documentary that focuses on important issues and has a spark of  originality, I would recommend The Truth about Alice. I can't wait to see how her next book turns out.
Posted by Sarah Woodard at 12:53 PM No comments: 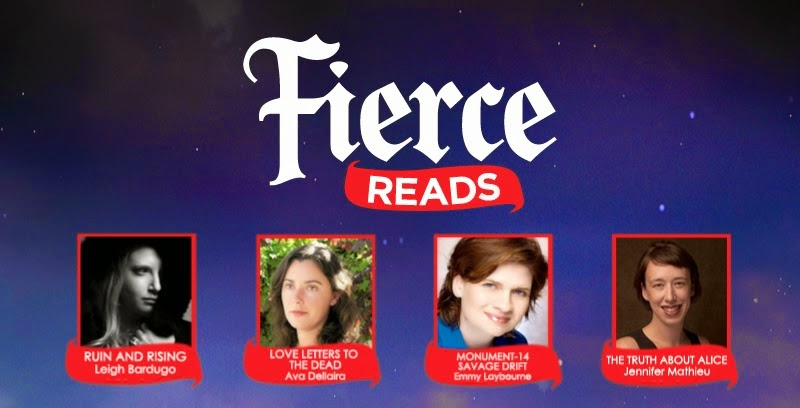 The amazing people at Macmillan asked me to be the Designated Blogger for the Seattle Event of the Fierce Reads Tour. Before the event I was able to interview them, I am transcribing, so it will be a paraphrase of what Leigh Bardugo, Emmy Laybourne, Ava Dellaria, and Jennifer Mathieu said.
I asked about their future projects.
Leigh talked about The Dregs, which was pitched as Oceans 11 meets Game of Thrones. It is based in the same world as her trilogy. The story takes place in Kerch, which is small, but very capitalistic island nation. The characters are from a slum and it follow their adventures.
Emmy talked about Sweet, which is about a B-List Celebrity cruise that launches a new sweetener. The plan is that they will come back from cruise a lot thinner. It begins as a funny experience that quickly changes to horrifying. She did hint at a romance within the story.
Ava talked about how Love Letters to the Dead was sold to Fox 2000 and and will be produced by Marty Bowen & Wyck Godfrey, who were the producers for The Fault in Our Stars. She is currently working on the Screenplay for it. While she isn't working on a book now, she would like to do so in the future.
Jennifer talked about her future book Devoted. It is written in 1st person and is based around Rachel who is in a very religious community  set in Texas that some people might call a cult. Rachel begins to explore the outside world. 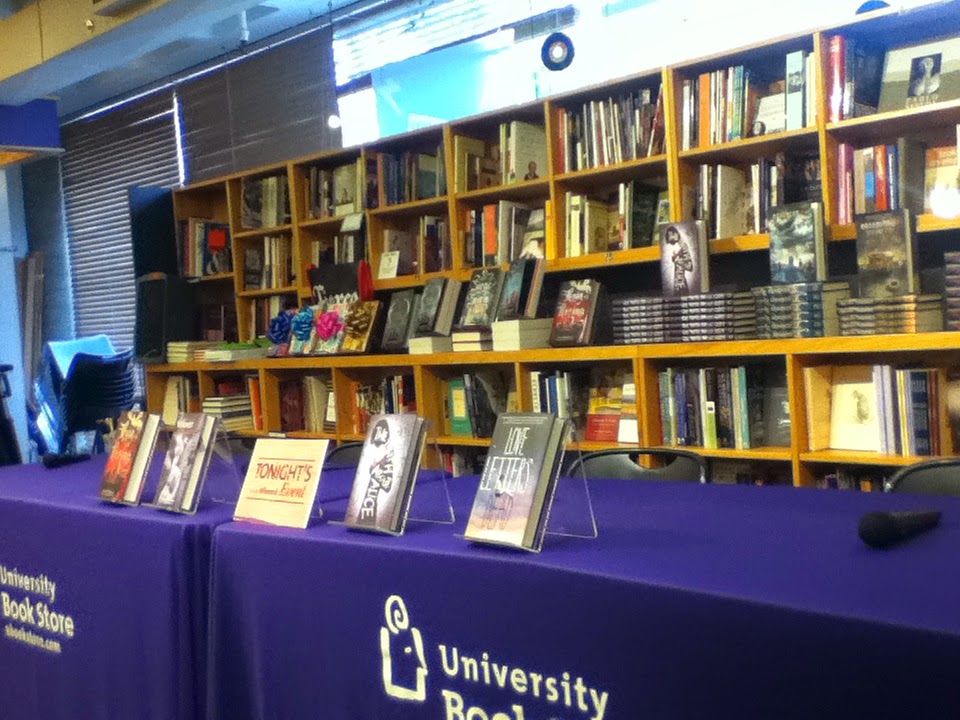 Next, I asked how their unique structure, Point of View, and contribution to their genre helped them with their books and future projects:
Emmy's next project Sweet varies from her Monument 14 Trilogy. The next project that she would like to pitch is paranormal romance. She would like to have a very board range of books like Scott Westerfeld.
Jennifer talked about how writing in 3rd person gives a great perspective and she would love to write more in the future. She found Devoted's 1st person to be very fresh and fun to write. She would love to continue in the Contemporary Genre.
Ava said that there is an intrinsic value to the structure of the project, because each one should be about reaching out into the world and talking about the unsaid. As a result, it should be based on the project. She felt that an Epistolary approach worked well for  writing Love Letters to the Dead, but not every project will allow that approach.
Leigh created a steady hand of 3rd that allowed her to lead into what she wrote in 1st person. This  helped allow the story to have the flow into the rest of the story. She agreed with Ava that the structures come with the story. For example, the current draft of The Dregs has a multiple point of view that works for it, but that might not work for other work. She said that she will always have a supernatural element in her stories. 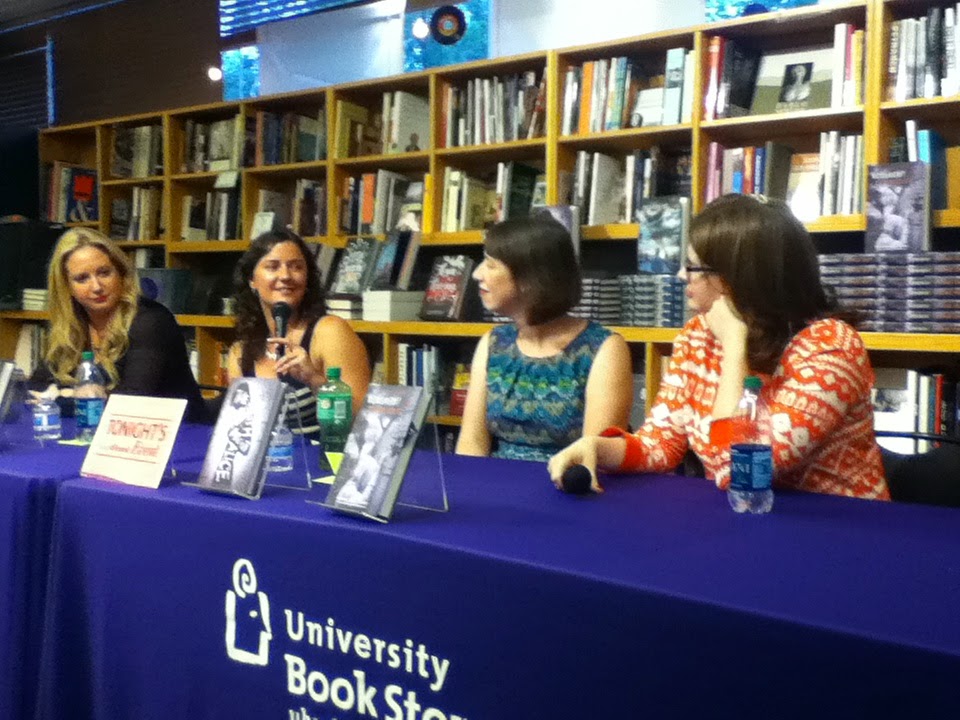 Lastly I asked what advice that they have for writers.
Ava thought that you should write what you love and let it be yours for a while. There is a moment that she feels like she doesn't need to share it and it is just the story and her. She also said protect your vision and create something that you want to come back.
Jennifer recommended to read constantly and notice the structure and technique that other writer use. Also don't be afraid to develop the voice from other books and writers.
Emmy said taking an improv class is good, because it teaches you to go with it, the basic structure of a story, and allows you to meet some new people and experience something new.
Leigh talked about how Sharp Objects by Gillian Flynn made her story very dark and made it interesting.She thinks that you need to just finish your book and edit it. Also, don't compare your first draft to another person's final draft.
Overall it was a great experience and pleasure to be able to interview them. We talked more about writing and I left for the signing.
The signing had an amazing Q&A done by Mel of Novels, News, and Notes from your Northwest Neighbors and a bookseller at University Bookstore. The authors were all very funny and graceful speakers and I enjoyed it. I got all of my book signed and it was amazing.
Here I am with Emmy Laybourne. 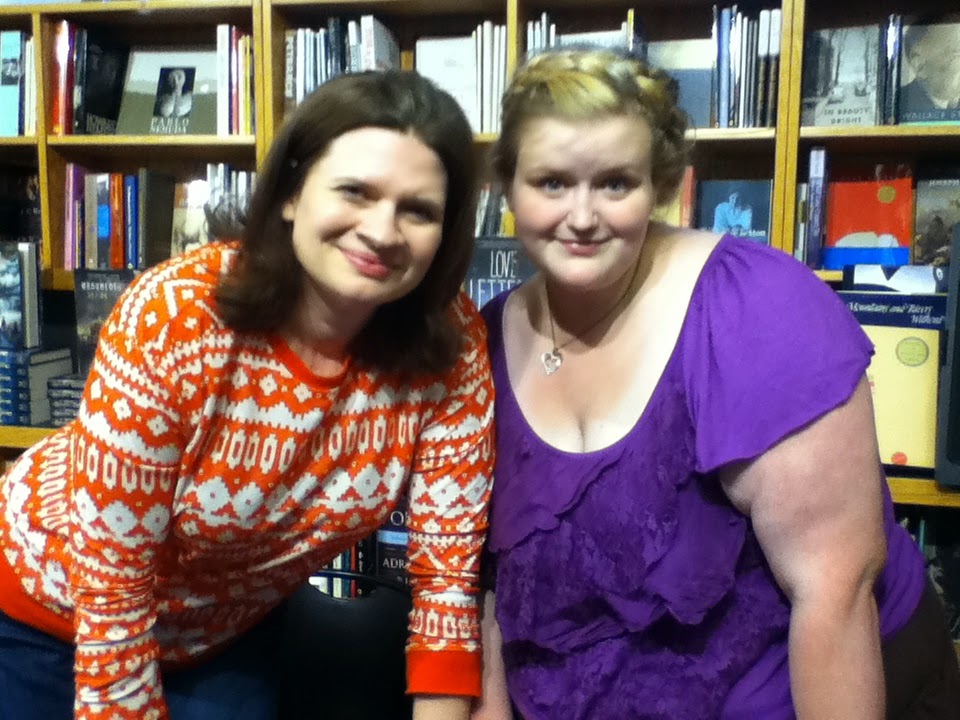 And Jennifer Mathieu... this is why why you should alway take two picture. 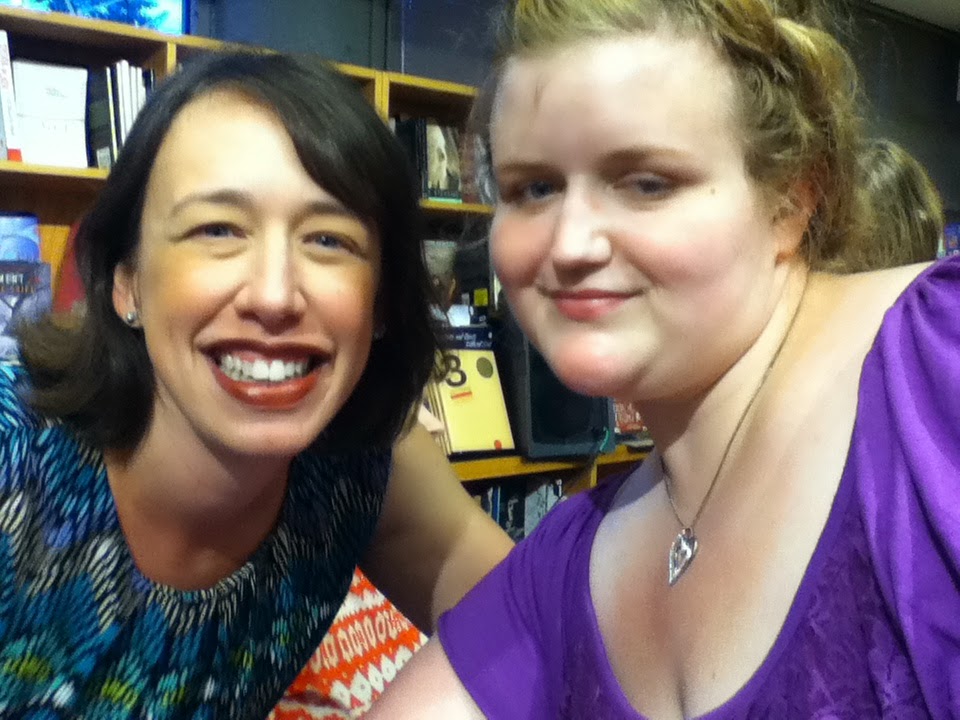 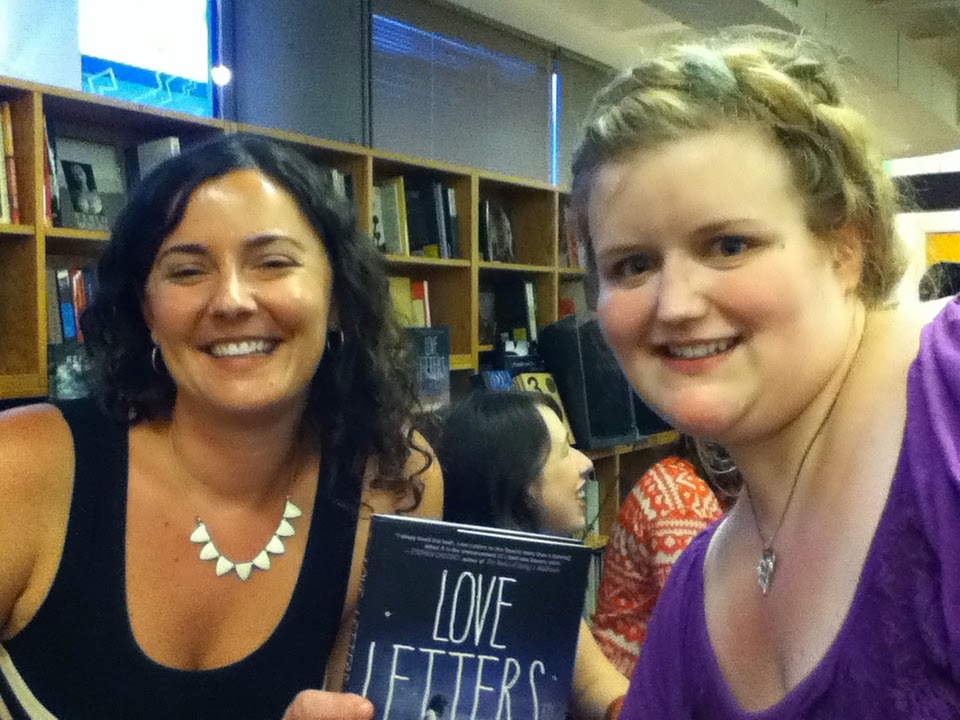 & Leigh Bardugo and I. 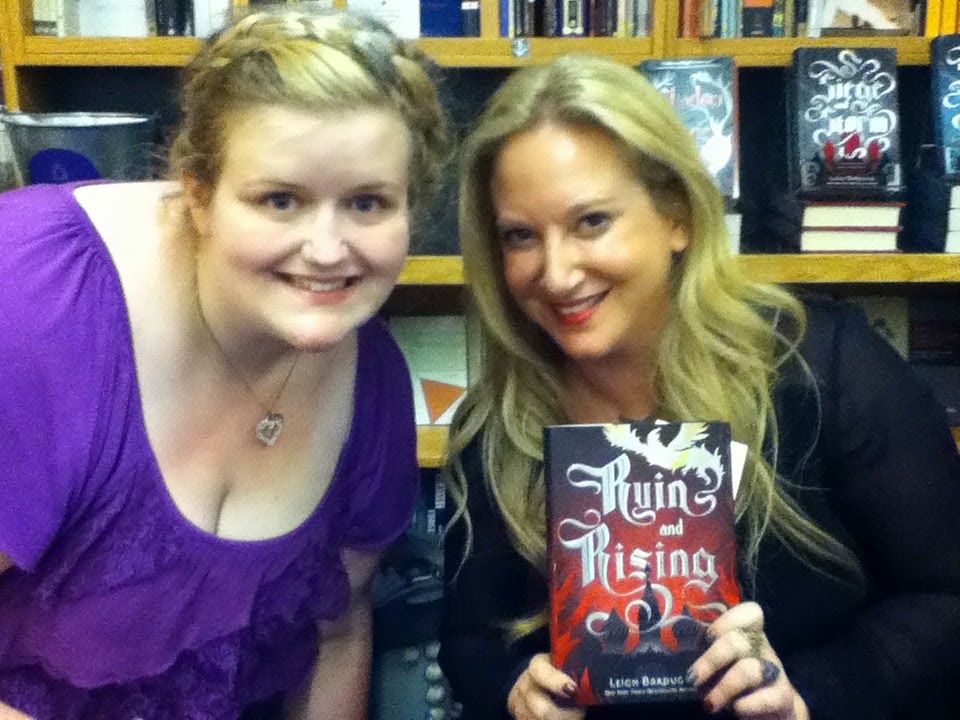 Now it is time to talk about the giveaway. Macmillan has a copy of Ruin and Rising, Monument 14: Savage Drift, Love Letters to the Dead, and The Truth about Alice. It is US only, and just fill out the form below. For further pictures, visit University Bookstore's flickr.

a Rafflecopter giveaway
Posted by Sarah Woodard at 11:33 AM 8 comments: