Day Two started at 9am for "Warning Extreme Content: Sex, Drugs, and Abuse as Themes in Young Adult Literature" with Ann Angel, Kekla Magoon and Carrie Jones. I honestly love Carrie as a human being. She is an amazing person, hence why I got there at 9 AM. Ann introduced the topic and how she had issue with publishing Janis Joplin: Rise Up Singing, because of some of the content. For example, she talked about how she incorporated Janis' album art, which include nudity. She wanted it as an illustration that once a photo is released into the world, you lose the capability to control who sees it. She also talked about how books become challenged and she wanted to do the panel. She then introduced Kekla Magoon. 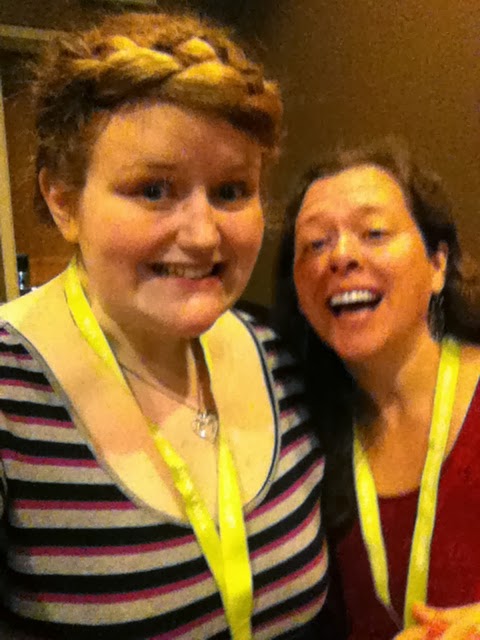 Kekla talked about the social and individual abuses that are talked about in Young Adult Literature. She used quotes from "Darkness Too Visible" by Meghan Cox Gurdon to show how problematic uninformed censorship is toward the marginalized population. She talked about self mutilation, drug abuse like in Crank by Ellen Hopkins, rape in Speak by Laurie Halse Anderson a , and kidnapping and abuse in Living Dead Girl by Elizabeth Scott are censored for the concern of gateway behavior and want to use their naivety to protect them. The thing is that these are issues that people need to face especially as teens. Kekla talked about the social abuse that Homophobia presents in YA. For example, Lesléa Newman's October Mourning and Lauren Myracle's Shine addresses similar issues. The fictional account was actually banned more, because it caused empathy. It is really important that we examine these issues, because otherwise the people are issolated and we aren't able to understand it. 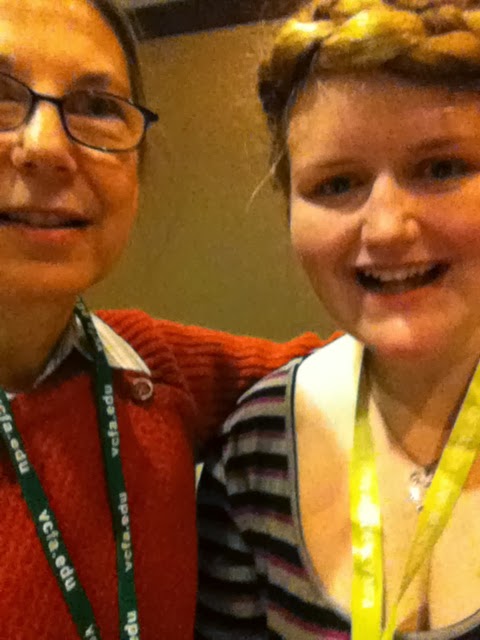 Carrie Jones talked about sex and how it was introduced to teens with Judy Blume, Norma Fox Mazer, Fanfiction, and romance novel. She also talked about V.C. Andrews' Flowers in the Attic and how it was one of the novels that teen encountered. There were 1577 complaints of sexually explicit material. She mentioned Safelibraries and how by censoring material, we limit the people that have access to it. When if we respect teens, censorship shouldn't happen. Ann Angel talked about how nonfiction is held to the same standards as fiction. Overall, I found their presentation to be very good and I enjoyed it. I was able to talk to Carrie afterwards. Lyn Miller-Lachmann came up and saw my name, which she recognized. It was really awesome that happened, because I reviewed her book back in 2009. 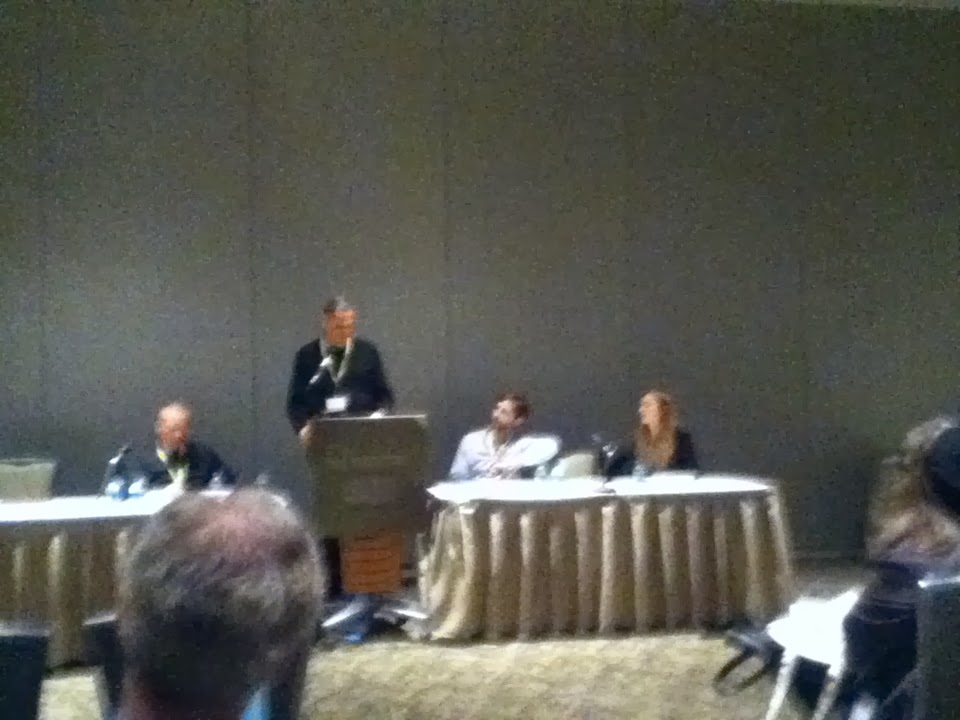 The next panel that I tried to go to was "Magic and Intellect", which was full.  I decided to go outside my comfort zone and went to "War Stories:Truth, Fiction, and Conflict." It was really interesting that it is often trauma vs. glory in war. Also that people are more distanced from war and as a result, they are unaware of it. I decided to get coffee after this, because I was tired. I stopped by the Seattle University booth and one of the creative writing professor was there. I talked to her about MFA stress and she assured me that she would help, which was good. I stopped by the Vermont College for Fine Arts and got the literature since Carrie and Lyn mentioned that I should go there.
I decided to go to "In Your Next Letter I Wish You'd Say: Epistolary Impulse and Innovation", because I use letters in my fiction and decided that it would be cool to hear about it, since it has several things different with what I usually do.
The next panel, that I went to, was "What I Wish I'd Known before I Started Writing for Kid and Young Adults." It featured Heather Bouwman, Kirstin Cronn-Mills, Sheila O'Connor, Shelley Tougas, and Rebecca Fjelland Davis. Kirstin came up and talked to me. She also signed my copy of Beautiful Music for Ugly Children. I actually livetweeted this one, so go to #f258 on Twitter, if you would like to read it.
Then I went to another panel that I didn't enjoy, which annoyed me. I am writing why in the next  post. It wasn't the presenters, but someone in the audience.  I went to AWP with a Twist of YA, which was a drinks night with bloggers, authors, and booksellers. The bar had red walls and old furniture in a old hotel. Kevin Emerson tweeted me later with how it was right out of The Shining and I agree. I met this girl also named Sarah that goes to Vermont College for the Arts, and much of my evening was spent with them talking about how life changing it was for them. I got to talk to a lot of authors about writing, their projects, and life. I met Deb Caletti, which felt super surreal to me. Since I adore her books and all. It was just a very fun night that I enjoyed.

Day Three:
The third day start with Sarah Mlynowski moderating "Never Grow Up: Building a Life in Children's and Young Adult Fiction with Adele Griffin, E. Lockhart, and Robin Wasserman. They talked about how they got started as writers, the sophomore slump, their fear of not being able to keep connected to YA/Children's, having crutches, or using cliches, ideal careers, literary agents, and review. Overall, it was a very critical and inspiring panel that showed that even what I consider to be secure and established authors have similar feelings that I have. It also felt like it was a conversation and not a panel, almost like you were invited to such intimate conversation about publishing. 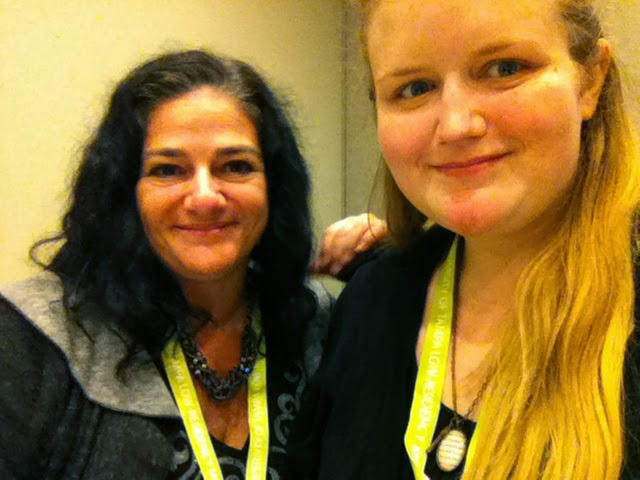 My university friend Chelsea was with me. We went and walked around the Book Fair. Then I went to "Pushing Boundaries in YA: Civil Disobedience, Violence, and War." It featured Ann Angel,  Zu Vincent,  Jessica Powers, and Lyn Miller-Lachmann. They said to go deeper in the historical, social, and cultural aspects of the story, because it helps the story be richer and more dimensional and realistic as a result. I went to "In Sickness and In Health: Writing about Illness and Loss for Young Adults." It featured Roberta Borger,  Megan Bostic,  Selene Castrovilla,  Jolene Perry, and Katherine Ayres. It was interesting, but I felt that it missed a critical part of illness, which is that the majority are chronic conditions. Most of their books talked about cancer. Megan is from around here and I have been following on Twitter for a while, so it was cool to meet her in person. 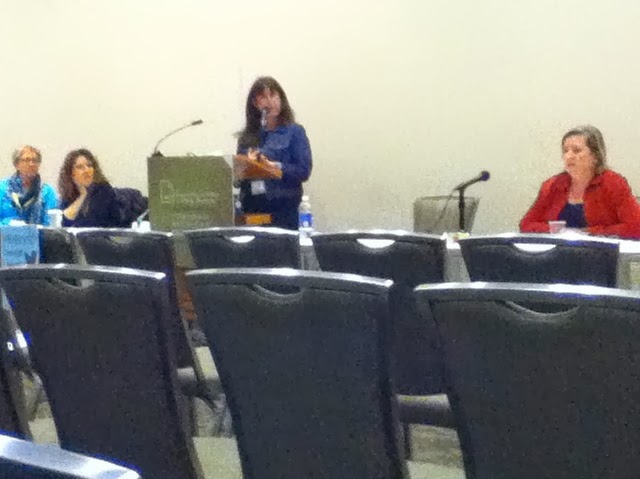 The next panel was "Crafting Heartbreak: Handling Grief Issues in Novels for Young Adults." It was in the same room, so that was convenient. The speakers were Joy Preble, Janet Fox, Rosanne Parry, and Denise Jaden. I loved Joy, Janet, and Denise's books and how they dealt with grief. It was a very realistic portrayal that showed grief in all of the aspects and in the entirety. Janet talked about the stages of grief and talked about books that related to the topic. Denise talked about the expressions of grief at different ages. She talked about how you can create conflict in the variance of their behaviors. Joy talked about hidden grief and how it serves a book. Lastly, Rosanne talked about death scenes. She talked about famous death scenes in famous children books and how some of them happen differently then she remembered. I experienced the same thing as she went over them and found it surprising that I didn't remember it. 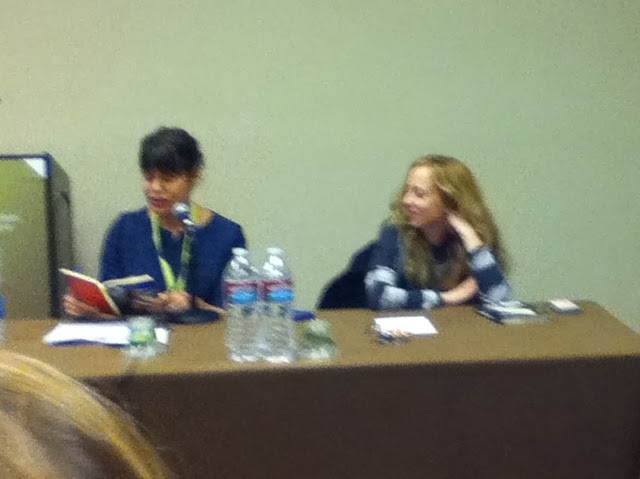 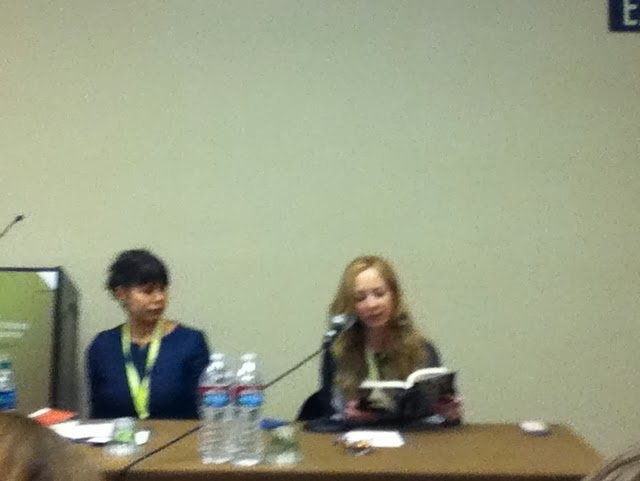 My last panel was "How Far Do You Go: Sex in YA Fiction". E. Lockhart moderated with Sarah Mlynowski, Robin Wasserman, and Adele Griffin. They all read from a piece of their fiction that had sex in it. Sarah and Robin talked about how they write around it. Sarah's writing is more sweet, while Robin talks about sexual assault and other aspects of sex. They also talked about how sex does not progress the plot, but a way to do it was talk about sexuality or consciousness.  They remarked that it is reason that some books become banned.  Sex can isolate the book by narrowing the audience, because school libraries and box stories won't carry it. They also talk about how a title can hurt the book. I found this to be really interesting panel and like before, it felt like a great panel and it was always funny and entertaining. 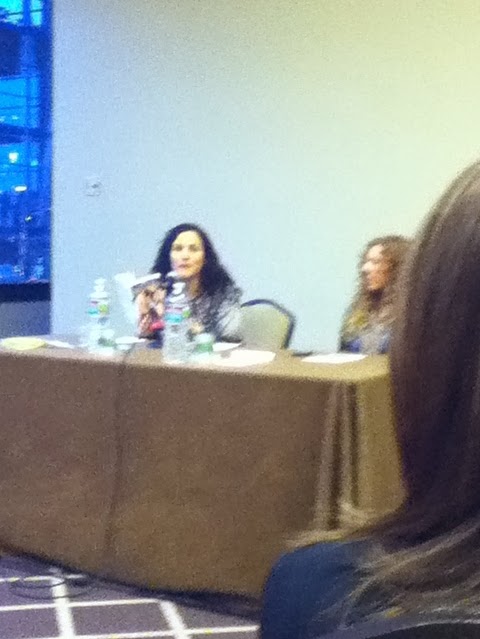 My experience at AWP was very inspiring. I was able to hear a lot about writing and I think that it will allow me to advance my craft. Overall, I would recommend AWP. It gave me a lot think about and showed that writers are just as anxious and worried as I am. I loved this experience. If you made it to the end, thanks. I know this is a rather long post.

Posted by Sarah Woodard at 3:23 AM No comments: