The Best Night of Your (Pathetic) Life by Tara Altebrando

Source: Publisher
An all-day scavenger hunt in the name of eternal small-town gloryWith only a week until graduation, there's one last thing Mary and her friends must do together: participate in the Oyster Point High Official Unofficial Senior Week Scavenger Hunt. And Mary is determined to win.Mary lost her spot at Georgetown to self-professed "it" bully Jake Barbone, and she's not about to lose again. But everyone is racing for the finish line with complicated motives, and the team's all-night adventure becomes all-night drama as shifting alliances, flared tempers, and crushing crushes take over. As the items and points pile up, Mary and her team must reinvent their strategy--and themselves--in order to win.
I adored Dreamland Social Club and was really excited to read this book. I found it to be a really fun and realistic read. Mary is a great character. She is about to go off to college and wants to have that last hurrah before going off to university. Like myself, Mary doubts herself and if her dreams are grand enough or if she is good enough for a boy that she likes.  I loved her friends. Her best friend Winter, her best guy friend Patrick, and Dez,  all have their own motives and reasons for participating in the Scavenger Hunt. They also each have an importance to the scavenger hunt. Winter reminded me of several girls that I know that didn't value themselves as much as they should have been. Patrick was sweet, but he didn't understand why some of his actions were bad. Dez was so funny and made me laugh so much. This book was an extremely fast read for me. I ended up reading it in two hours in one sitting. The plot is very quick and fun, but still has a mix of seriousness too. Overall, I enjoyed this book and found it to be very funny and enjoyable. Tara  Altebrando is a great writer and I am excited to read more from her.
Posted by Sarah Woodard at 3:55 PM No comments:

Daughter of Smoke and Bone by Laini Taylor 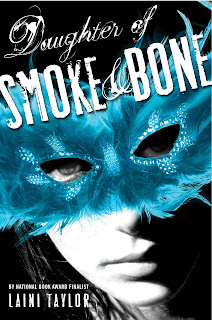 Source: Publisher
Around the world, black hand prints are appearing on doorways, scorched there by winged strangers who have crept through a slit in the sky.
In a dark and dusty shop, a devil's supply of human teeth grows dangerously low.
And in the tangled lanes of Prague, a young art student is about to be caught up in a brutal otherwordly war.
Meet Karou. She fills her sketchbooks with monsters that may or may not be real; she's prone to disappearing on mysterious "errands"; she speaks many languages—not all of them human; and her bright blue hair actually grows out of her head that color. Who is she? That is the question that haunts her, and she's about to find out.When one of the strangers—beautiful, haunted Akiva—fixes his fire-colored eyes on her in an alley in Marrakesh, the result is blood and starlight, secrets unveiled, and a star-crossed love whose roots drink deep of a violent past. But will Karou live to regret learning the truth about herself?

Karou is an awesome character. I liked that she was really creative and fierce. She was just a very lively character that thrived on her independence and strength. She doesn't compromise herself, but challenges people. Avika was also an awesome character and I liked that he was strong and evolved over time.
Zuzana was a great friend. She challenged Karou, but still wanted the best for her.  The plot was epic. By the time that I finished this book, I wanted more. Part of the reason is that Taylor created a complex story in a very imaginative  world that I felt immersed in from the first page to the last page. This story was extremely original and spectacular.  Taylor's writing was amazing.  It is just so beautiful and honest and hard to explain without making it me sound like more of a fangirl. I enjoyed this book and can't wait to read more. If like me in July, you haven't read this book, even though you have heard great things about it. You need to forget everything else on your To-Read Pile and read this like now.
Posted by Sarah Woodard at 2:57 PM 1 comment:

Dreams vs Reality of the Future

In two weeks, I start my second year of University. I am majoring in English Literature and Creative Writing and I often get asked the question that many liberal arts major hate: So, what do you plan on doing after college?
There is the practical Sarah that says she going to get a Masters Degree in Library and Information Studies, which will most likely give me a job with probably benefits and not be paid in monopoly money. There is also the dream Sarah that would like to get a Masters Degree in Creative Writing, where practically Sarah says I will probably freelance write and not have important things like insurance and such. Even though I would enjoy either career. I love reading books, but I also love writing. I am not torn between them, since they aren't exclusive to one or the other.
One of my university friends suggested that I should stop thinking about this, because I don't graduate for three years and technically I could always do both or just apply to both and see where I am accepted.
Either way, I am thinking about this especially when I fill out loan applications and they ask what I am going to do two years after graduation. The truth is that like most people I don't know what I am going to do. If I asked fifteen year old or seventeen year old Sarah, she would have a different image of where I would be. One would think that I would be Pre-Med and the other Finance(I don't like Math or Science as much now).
Anyways, I was wondering if anyone else felt this way or didn't really know what they were going to do as a young adult.
Best Wishes, Sarah.
Posted by Sarah Woodard at 2:37 PM 2 comments: