The Waking: Dreams of the Dead by Thomas Randall and Some Q&A 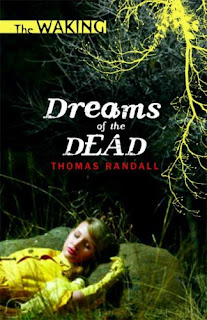 Rating:
Characters: 18/20
Plot: 19/20
Originality: 19/20
Writing: 19/20
Recommendation: 19/20
Overall: 94/100 or A
Kara Foster moves to Japan, after her mom's death. Her dad has received a job offer at a private school. She is a complete outsider and becomes friends with Sakura. Sakura is also an outsider that is dealing her sister's unsolved murder. It seems that no one cares that a beautiful girl was murdered, right behind the school. The other students go on as, if nothing has happened. Sadly, that doesn't last for long. Kara begins to have nightmares and a few of her fellow classmates start turning up dead. Is Sakura getting back at those she thinks are responsible for her sister’s death? Or has her dead sister come back to take revenge for herself?
I am a huge fan of all things scary, so when I heard about this book. I got excited. I loved how dreams played a big part of this book, because it is something that I believe in. It was really interesting and hard to put down. Kara is like any other normal sixteen year old girl, except that she is in Japan and learning a whole new way to live in a sense. She is also dealing with the grief from her mother. She was very strong and able to handle anything thrown at her. I found the Japanese culture to be very fantasising. The mysterious and scary atmosphere reminded me of Nightmare on Elm Street and The Devouring mixed together. I recommend this book, if you are looking for a spooky read for Fall.
I also had the honor of asking Thomas Randall, a few questions. Enjoy!
1. Kara starts having nightmare and then basically everything goes downhill from there. What about nightmares or dream, do you find the most powerful?
Some of the most powerful emotions I've ever felt in my life--love, grief, terror--I have felt in dreams. You have no shield, no defense mechanisms at all. I've woken up full of abject sorrow, and I've woken up inspired by the bizarre and fantastic stories that have unfolded in my dreams, which I have then turned into stories. In dreams you can visit with old friends, you can return to childhood, you can talk to the dead. Months after my father died I had several dreams in which I saw him and though he did not speak to me in them, he smiled and nodded and somehow let me know that he was all right, and that I would be, too.
Dreams are endless opportunities for your heart and imagination. Even the worst nightmares are things of extraordinary power and wonder and you wake feeling like you just escaped from some prison, but you created it yourself, without knowing how. It's your subconscious gone wild.
2. Where did you get your inspiration for The Waking?
I've always been fascinated by Japan, but not only Japan. America is a young nation. In places like Japan, often the distant past and the present seem to exist all at the same time. Which is a parallel to how we sometimes view them, especially Japan, where so much of their modern pop culture has spread to the United States in manga, anime, and movies, though we are also so interested in their history. Samurai tales and ghost stories. Japanese mythology and philosophy...there's so much that intrigues me. Regarding THE WAKING...there are tons of vampiric creatures in Japanese folklore, but no real vampire (the sort of vampire that appears in most other cultures in some form or another). I wanted to explore those. Also, I admire the courage of people who immerse themselves in other cultures. My sister lived for a while in China when I was young, and I was always intrigued and impressed by that, especially by the idea of being such an outsider, literally a stranger in a strange land.
3. What is your favorite and least thing about writing?
My favorite thing is the commute from my bedroom to my desk (about four seconds). My least favorite thing is the discipline required to get the work done. It also doesn't help that it's such a solitary occupation, especially because that prompts me to spend too much time on Facebook or whatever.
4. What advice would you give to aspiring writers?
If one person tells you that you stink, don't listen. If the only person who tells you that you're good is your mom, don't listen to her, either. Accept that the urge to write does not make you a writer and that you probably have a lot to learn. (We all do.) Study Strunk & White's THE ELEMENTS OF STYLE. Read a lot. Write a lot. Find people who will give you *honest* criticism. You'll know the difference, no matter how much it frightens you to admit it. Go to conventions where writers and artists and editors gather. Meet people. Learn about the business as well as the craft. Realize that only a relative of handful can make a living writing and be realistic about whether or not you can handle that kind of stress, and if you can, then go for it.
5. Other then writing and reading, what do you like to do?
If I'm not working, I'm usually just hanging out with my family. We watch too much TV, but we do it together. :)
6. Is there anything that you would like to add?
Only that I got a little creeped out writing DREAMS OF THE DEAD, so I hope you all get a little creeped out reading it. 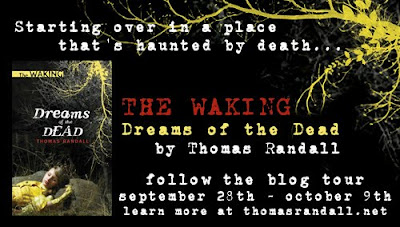 Labels: A, Interview, Review, The Waking: Dreams of the Dead, Thomas Randall