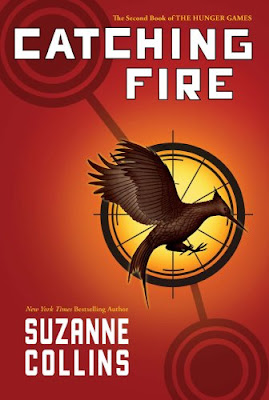 Rating:
Characters: 16/20
Plot: 17/20
Originality: 19/20
Writing: 17/20
Recommendation: 16/20
Overall: 85/100 or B
I don't think that I really need to explain what is going on in Catching Fire. It is the Sequel to The Hunger Games. After what happens in The Hunger Games, you know that there is going to be some sort of fallout after what happened in the Hunger Games. After, pretending to be in love with Peeta, she has to still pretend to be in love. She also suddenly loves Gale, when it seemed like they were only friends in The Hunger Games. Now it is Peeta or Gale, it seemed that she honestly she can't choose who.
That was really annoying since Katniss was so kickass and independent in The Hunger Games and now she isn't. It took a while for me to get into Catching Fire, but when I finished, I enjoyed it. The pacing of Catching Fire didn't match it's prequel. It seemed that Collins took the easy way out on writing the book and choose things that would cause the most drama.
Like, she would had very humanized character, but then you have President Snow, who is just pure evil. He had no emotions and didn't care about others. This really upsets me, because I honestly don't think that anyone human is that evil. Even though that I didn't love this book as much as The Hunger Games, but I will definitely read the next sequel. Since there was such a huge cliffhanger. I still enjoyed this book, even with all of it's flaws. There was still the action that I loved in The Hunger Games. I would check out the series, if you like books with a lot of twist.
Posted by Sarah Woodard at 12:20 PM