Ballads of Suburbia by Stephanie Kuehnert 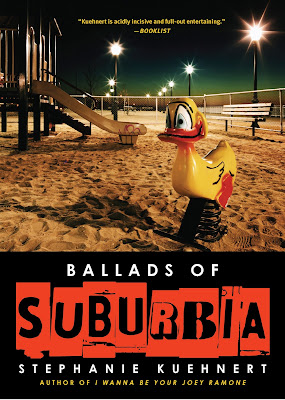 Rating:
Characters: 19/20
Plot: 19/20
Originality: 20/20
Writing: 19/20
Recommendation: 20/20
Overall: 97/100 or A
Kara hasn't been back to Oak Park, since the end of her junior year. She overdosed on heroin and nearly died. Four years later, she returns to face the music. In high school, her life changed forever. Her family was torn apart and she found a new group of friends. She partied a bit too hard and she fell in love with a gorgeous bad-boy, who left her to die that day in Scoville Park...
Amid the music, the booze, the drugs, and the drama, her friends filled a notebook with heartbreakingly honest confessions of the moments that defined and shattered their young lives. Now, finally, Kara is ready to write her own ballad of sex, drugs, punk rock, loss, death, running away, and trying to figure out who the hell you are.
Kara McNaughton reminds me so much of my older sister. She had a rough patch like Kara, and I was the only one in my family to know what what was really going on. This book had an array of characters and I love their flaws and their gifts. Kuehnert captures the many emotions of being a teen. I was wow-ed by this book. I have been around family members with addictions my whole life and I have seen the effects of drugs on people, since I was about ten. In high school, some of my closest friends were/are cutters. I have seen the pain that goes into that. I think that Kuehnert did an amazing job capturing it. The ballads also gave me the insights of the characters and what was at the very core of them. Why some of them made questionable decisions that I wouldn't consider. I was crying at the end of this book, because I felt so connected to the characters. Kuehnert is an amazing writer. Ballads of Suburbia is one of those books that you just can't put down and I recommend that you go read it right now.
Posted by Sarah Woodard at 5:05 PM