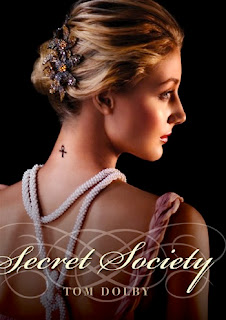 Rating:
Characters: 17/20
Plot: 18/20
Originality: 18/20
Writing: 17/20
Recommendation: 15/20
Overall: 85/100 or B
An eccentric new girl. A brooding socialite. The scion of one of New York’s wealthiest families. A promising filmmaker. As students at the exclusive Chadwick School, Phoebe, Lauren, Nick, and Patch already live in a world most teenagers only dream about. They didn’t ask to be Society members. But when three of them receive a mysterious text message promising success and fame beyond belief, they say yes to everything.
Even to the harrowing initiation ceremony in a gritty warehouse downtown, and to the ankh-shaped tattoo they’re forced to get on the nape of their necks. Once they’re part of the Society, things begin falling into place for them. It’s all perfect—until well, a body is found in Central Park with no distinguishing marks except for an ankh-shaped tattoo.
Secret Society was a really different book. I liked how it had the world of New York mixed in with a secret society. Patch, Lauren, Phoebe, and Nick reminded me of people that I knew in High School. I could all relate to them in a way and found them interesting. Dolby created a twisting mystery that was interesting and unpredictable.
The secret society shocked me. The ankh tattoos freaked me out, like waking up with it. That would so scare me. Also the creepy people that ran it, were creepy. I was shocked how it worked, but I still wanted to keep on reading it. I felt bad about the price that you had to pay to get into the society and what could happen if you wanted to leave or did something wrong. I had so many questions about the book and wanted more. But it was also paced oddly. I think that you will like Secret Society, if you like Pretty Little Liars and the Private Series.
Posted by Sarah Woodard at 1:25 AM