So, I was offered this book for review, but it didn't really seem like something I would enjoy. So I asked if I could do a giveaway, since I knew that people wanted to read this. So here is the book... 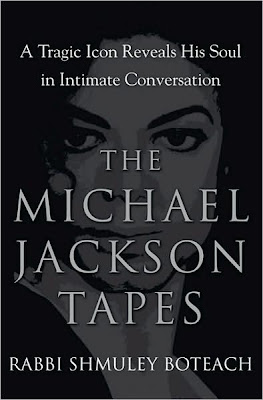 The Michael Jackson Tapes:A Tragic Icon Reveals His Soul in Intimate Conversation by Rabbi Shmuley Boteach Here is the summary:
In 2000-2001, Michael Jackson sat down with his close friend and spiritual guide, Rabbi Shmuley Boteach, to record what turned out to be the most intimate and revealing conversations of his life. It was Michael's wish to bare his soul and unburden himself to a public that he knew was deeply suspicious of him. The resulting thirty hours are the basis of The Michael Jackson Tapes. There has never been, and never will be, anything like them.
In these searingly honest conversations, Michael exposes his emotional pain and profound loneliness, his longing to be loved, and the emptiness of his fame. You discover why he was suspicious of women and how only children provided the innocence for which he so desperately longed.
In his own words, he takes us into the jarring moments of his childhood and speaks of the measures he took to try and heal. He divulges how he came to be alienated from his strong religious anchor and describes his views on the nature of faith. Michael brings us into his tortured yet loving relationship with his siblings. He opens up about his father and his yearning for a time when they might finally reconcile. He talks about his most personal friendships and shares with us his terror of growing old.
Despite his unprecedented fame and recent death, there remain unanswered questions about his life. The answers, presented here in The Michael Jackson Tapes, will both intrigue and move you. You will be surprised, riveted, and troubled as you peer into the soul of a tragic icon whose life is an American morality tale and whose flame was extinguished much too early.
To enter answer this question: What is your favorite Michael Jackson song?
Extra entries:
1. New or Current follower. +5
2. Re-post it in any social network or blog. +3 each
3. +1 for each referral and +1 on being referred.
This Contest is open till October 26th at midnight. It is only open to USA addresses only.
Posted by Sarah Woodard at 11:04 AM