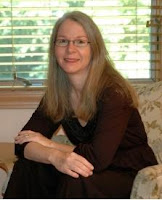 Lisa Klein is the author of Ophelia, Lady Macbeth's Daughter, and Two Girls in Gettysburg. Her re-telling of Ophelia and Lady Macbeth's Daughter is a retelling of Shakespeare's Hamlet and Macbeth, with a more female centered plot. Both books are really interesting. She started writing Ophelia in 2001 and it was published in 2006. Now, she live in Columbus, Ohio with her husband, two teenage sons, a dog and a cat. You can visit her website at http://www.authorlisaklein.com/.

Rating:
Characters: 17/20
Plot: 18/20
Originality: 17/20
Writing: 18/20
Recommendation: 17/20
Overall: 87/100 or B
Albia grew up with no knowledge of her mother or father. She didn't know that he was the powerful Macbeth. Instead, she knows the dark lures of Wychelm Wood and the moors, where she has been raised by three strange sisters. Macbeth seeks out the sisters to foretell his fate that Albia's life is tangled in with. She even falls in love with Fleance, Macbeth's Rival for the throne. Albia learns that she has second sight and she must decide whether to ignore the terrible future she foresees or she'll have to change it. Will she be able to save the man she loves from her murderous father. And can she forgive her parents for all their wrongs, or must she destroy them in order to save Scotland?
I love a retelling of another book. Practically Shakespeare's books, because it is interesting to be in someone else's shoes. Lady Macbeth's Daughter kept with the storyline well and was very entertaining. Albia is a very kick ass girl for before the Renaissance. I loved her personality and how she was such a free spirit. I also loved how the relationship with Albia and Fleance developed. It was very cute. I also liked how Macbeth was developed. It was awesome that it was from other character's view, then just Albia. The plot made it such a quick and interesting read. I also think that this was an original retelling of Macbeth. The writing was also well detailed. I would check this book out, if you are looking for a strong independent female character.
Posted by Sarah Woodard at 9:32 AM