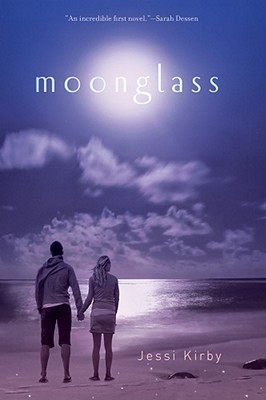 Source: Publisher
From Jessi Kirby, a debut novel about confronting the past in order to move ahead.
I read once that water is a symbol for emotions. And for a while now, I've thought maybe my mother drowned in both.
Anna's life is upended when her father accepts a job transfer the summer before her junior year. It's bad enough that she has to leave her friends and her life behind, but her dad is moving them to the beach where her parents first met and fell in love- a place awash in memories that Anna would just as soon leave under the surface.
While life on the beach is pretty great, with ocean views and one adorable lifeguard in particular, there are also family secrets that were buried along the shore years ago. And the ebb and flow of the ocean's tide means that nothing- not the sea glass that she collects on the sand and not the truths behind Anna's mother's death- stays buried forever.
I love the beach and beach reads seem to capture the sun on your skin, the sand between your toes, and the scent of the ocean. Moonglass had all of these feelings and more. The setting of Crystal Cove was a perfect setting. Anna was an awesome girl. She was very down to Earth and innocent. Unlike most young adult novels, she was still haunted by her mother's death and still hung out with her dad a lot, which meant that her parents were a huge part of the story. Tyler was so sweet and I adored him. He was unpredictable, which kept me guessing. I loved the mermaid mythology that was part of the plot. This plot was very intense, and I found myself to be engrossed through out the book. Kirby's writing was amazing. I loved the rich setting, intricate character, and a thrilling plot. It was definitely an amazing debut. This book is a must read for fans of Sarah Dessen, Sarah Ockler, and Melissa Walker. It is a perfect beach read!
Posted by Sarah Woodard at 12:53 AM