I asked on Saturday, which book would you would want to see in a contest... Well, I decided to do a contest with both books, since the vote were pretty much even and it is almost Christmas. The books are Undead Much? by Stacey Jay and The Line by Teri Hall. 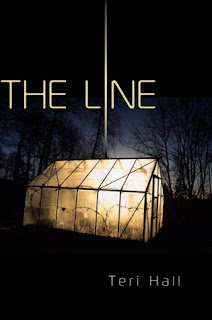 The Line by Teri Hall is about:
Rachel lives with her mother on The Property. The good thing about living there is that it’s far from the city where the oppressive government is most active. The bad thing, at least to most people, is that it’s close to the Line—an uncrossable section of the National Border Defense System, an invisible barrier that encloses the entire country.
She can see the Line from the greenhouse windows, but she is forbidden to go near it. Across the Line is Away, and though Rachel has heard many whispers about the dangers there, she’s never really believed the stories. Until the day she hears a recording that could only have come from across the Line.
It’s a voice asking for help.
Who sent the message? What is her mother hiding? And to what lengths will Rachel go in order to do what she thinks is right?

Undead Much? by Stacey Jay is about:
Q: How many guys does it take to make your boyfriend wild with jealousy?A: Only one, if he's UNDEAD.
Megan Berry had a perfectly average new-sundress-and-boy-obsessed life--until her power to settle the Undead returned. Oh, and then her best friend tried to kill her--and ruin homecoming--with a bunch of black magically raised zombies. At least she got a spot on the pom squad and a smokin' boyfriend (Ethan). But now Megan is in deep fertilizer all over again.
Why? Well, let's see... · Feral new super-strong zombies? Check. Cheerleader vs. pom squad turf war threatening half time as they know it? Check.
An Undead psychic hottie (Cliff) who's predicting a zombie apocalypse--and doing his best to tempt Megan away from Ethan? Yum. I mean, Check.
Earth-shattering secrets that could land Megan in Settler prison for life? Um, IT WASN'T ME!!!
Everyone thinks Megan's at fault for the new uber-zombie uprising. Looks like she'll need the help of both Cliff and Ethan if she's going to prove her innocence before it's too late...
To enter(if you want both books, answer both questions):
For Undead Much?: What would you do, if zombies are coming after you?
For The Line: How far would you go to help someone?
Extra entries:
1. New or Current follower. +5
2. Re-post it in any social network or blog. +3 each
3. +1 for each referral and +1 on being referred.
This Contest is open till December 26th at midnight. It is only open to USA and Canada addresses only.
Posted by Sarah Woodard at 5:50 PM