In My Mailbox(Week of August 30th)

In My Mailbox was started by the Pop Culture Junkie and memefied by The Story Siren.

The Monster Variations by Daniel Kraus
This fast-paced read will keep readers on the edge of their seats!Someone is killing boys in a small town. The murder weapon is a truck, and the only protection is a curfew enacted to keep kids off the streets. But it’s summer—and that alone is worth the risk of staying out late for James, Willie, and Reggie. Willie, who lost his arm in the first hit-and-run attack, finds it hard to keep up with his two best friends as they leave childhood behind. All of them are changing, hounded by their parents, hunted by the killer, and haunted by the “monster,” a dead thing that guards the dangerous gateway between youth and manhood. But that’s not all: shadowing the boys everywhere is Mel Herman, the mysterious and brilliant bully whose dark secrets may hold the key to their survival. As the summer burns away, these forces collide, and it will take compassion, brains, and guts for the boys to overcome their demons—and not become monsters themselves. In this chilling and poignant debut novel, Daniel Kraus deftly explores the choices boys grapple with and the revelations that occur as they become men.
This book sounds really good.

Marni by Marni Bates
Marni pulls. Pulls her hair, that is. Unable to deal with the mounting stress at home, in school, and with friends, Marni's compulsion to pluck out her eyebrows, eyelashes . . . even the hair from the top of her head, helped her to quiet her mind and escape the pressures of the world around her. Marni first began pulling the summer just before entering high school, and she was immediately hooked. Unfortunately, by the time she discovered that her habit was an actual disorder—trichotillomania or "trich"—it was way too late. "When I stared at the mirror and tried to recognize the girl without eyebrows, eyelashes, and bangs as myself and failed, I knew something had gone horribly wrong." Because Truth Is More Fascinating Than Fiction.
Chelsey by Chelsey Shannon
Chelsey was dealth the unthinkable. When Her Only Surviving Parent, her beloved father, was violently murdered days before her fourteenth birthday, Chelsey's life was forever changed. As she was forced to come to terms with a new home life, a new school . . . a new identity as an orphan, Chelsey struggled to make sense of her personal tragedy. Yet she found a way to flourish despite all the odds. "I thought of myself in a new light: a girl, newly fourteen, standing in her dead father's study, all in black, a single tear streaming down her cheek. I was alone. My family told me again and again I was not, but without him, I was. I was no longer anyone's child." Because Truth Is More Fascinating Than Fiction.
Emily by Emily Smucker
Emily's the sick one . . . all of the time. Plagued with some sort of cold or fever or bizarre aches and pains for much of her life, Emily thought the dizziness and stomachaches at the start of her senior year were just another bout of "Emily flu." But when they didn't go away, she knew something was seriously wrong. Eventually diagnosed with the rare and incurable West Nile virus, Emily watched her senior year and the future she had planned for go up in smoke. "I want a normal life for a teenager. I want to ache from a long day at work. I want to be so busy that I don't have time to post on my blog. I want to run the race of life instead of being pushed along it in a wheelchair. I want to be on the ride of my life, you know?" Because Truth Is More Fascinating Than Fiction.
I added these on Goodreads and got an @reply from the editor on Twitter. She asked if I have got them for review, and I hadn't. So, she had the publisher send me some. I really excited to read these books. 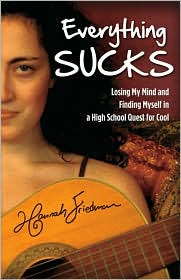 Everything Sucks by Hannah Friedman
When everything sucks,change everything . . .
And that's exactly what Hannah Friedman set out to do in an ambitious attempt to bust out of a life of obscurity and absurdity and into an alternate world of glamour, wealth, and popularity.
Being dubbed 'That Monkey Girl' by middle school bullies and being pulled out of sixth grade to live on a tour bus with her agoraphobic mother, her smelly little brother, and her father's hippie band mates convinces Hannah that she is destined for a life of freakdom.
But when she enters one of the country's most prestigious boarding schools on scholarship, Hannah transforms herself into everything she is not: cool. By senior year, she has a perfect millionaire boyfriend, a perfect GPA, a perfect designer wardrobe, and is part of the most popular clique in school, but somehow everything begins to suck far worse than when she first started. Her newfound costly drug habit, eating disorder, identity crisis, and Queen-Bee attitude lead to the unraveling of Hannah's very unusual life.
Putting her life back together will take more than a few clicks of her heels, or the perfect fit of a glass slipper, in this not-so-fairy tale of going from rock bottom to head of the class and back again.
I am really excited to read this. It looks really good.

Lady Macbeth's Daughter by Lisa Klein
In alternating chapters, ambitious Lady Macbeth strives to bear a son and win the throne of Scotland for her husband, and their daughter Albia, banished due to a deformity, tries to deny her supernatural abilities as she is raised in the woods by three weird sisters, in this tale based on Shakespeare’s Macbeth.
I got this for a Traveling to Teens tour. I am really excited to read it. Since I really enjoyed Ophelia. 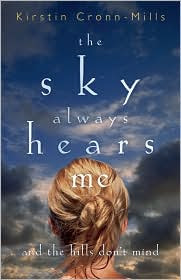 The Sky Always Hears Me: And the Hills Don't Mind by Kirstin Cronn-Mills
Sixteen-year-old Morgan lives in a hick town in the middle of Nebraska. College is two years away. Her mom was killed in a car accident when she was three, her dad drinks, and her stepmom is a non-entity. Her boyfriend Derek is boring and her coworker Rob has a very cute butt that she can't stop staring at. Then there's the kiss she shared with her classmate Tessa...
But when Morgan discovers that the one person in the world she trusted most has kept a devastating secret from her, Morgan must redefine her life and herself.
I have already read this and I really liked it. It isn't excaltly how it sounds.
I also got a repeat of Thanksgiving at the Inn by Tim Whitney.
The Bought:
Strange Angel by Lili St. Crow
Vampire Academy by Richelle Mead
Blood Promise by Richelle Mead
Posted by Sarah Woodard at 12:36 PM

Labels: IMM, In My Mailbox