Kimberly has loved writing since Juinor High. Her book, The Body Finder will be coming out in March 2010 and you should totally preorder it soon. Her second book, Desires of the Dead, will be released in 2011 She lives in the Pacific Northwest, which is the ideal place to be writing anything dark or creepy...a gloomy day can set the perfect mood. She live with my husband and our three beautiful (and often mouthy) children, who serve as an endless source of inspiration for my writing. If you want to learn more about her, visit her site here.
1. Violet can sense who has been murdered and the murder. Where did you get this idea?
The idea actually came from my husband one day while we were driving. He’s always throwing around ideas, and he looked at me and said: “What if there was a person who could find dead bodies.” Of course, in his head it was a Middle Grade boy, but for me it was something else entirely. My brain went into overdrive, and by the time we got home I was practically racing through the front door to start making notes. That was how Violet (and her creepy ability) was born. 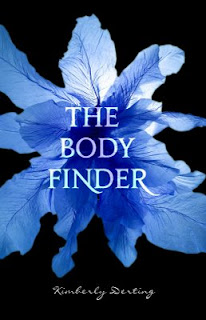 2. What was it like writing about murders so close to home? Did that help with the setting?
I loved writing about the Pacific Northwest, especially the scenes that involved Mount Rainier or Lake Tapps, because they are such a huge part of my daily life. For me, the setting became almost like a character in my book…an old friend that I was very comfortable with.
3. You are both a Deb and a Tenner. What is it like having dual citizenship?
Oh my gosh, it’s so much fun! I love them both equally, and even though they’re sister groups (formatted very similarly), the personalities of the members make them completely different. I’ll admit that I was hesitant about the Tenners at first, because I was so ensconced in the Debs when I was told my book was being moved to 2010. I think I even resented the Tenners a little at first, like they were replacing the Debs (only in my head, of course). But now that I’ve gotten to know them, I absolutely love them! It’s like having a huge extended family…one that understands what you’re going through in this crazy world of publishing!
4. What are some of your favorite books?
I have been so fortunate this past year to read an abundance of fabulous books, thanks to both the Tenners and the Debs, but I have to say that some of my all-time faves are still books like To Kill A Mockingbird (which everyone says, but it’s true!), The Shining (which is the complete opposite of TKAM, but I’m a rabid Stephen King fan), The Kite Runner (because I cried), Night by Elie Weisel (because I was appalled) and The Golden Compass (because Philip Pulman created an amazing world). Wow, what a crazy list!!!
5. You have wanted to write since Junior High. What was it like getting the call about The Body Finder?
Intense. That’s almost all I can say about it. It was the most intense and surreal experience of my life. You can dream about it forever, but when it actually happens it’s almost impossible to believe.

6. You admit on your website that you love TV. What shows do you like the most?
HAHA! I do like TV, which I feel almost guilty admitting out loud. But my TV taste is like my book taste, I like a little bit of everything. I love HOUSE, IT’S ALWAYS SUNNY IN PHILADELPHIA, MEDIUM (Oooh, I love Medium!), BONES, HEROES, 30 ROCK, THE OFFICE, and I totally wish they’d bring back ARRESTED DEVELOPMENT (sick and wrong is my favorite combination!).
7. Is there anything that you would like to add?
Just thanks for having me. Oh, and for those of you who don’t know already, Sarah was the first reviewer to read The Body Finder, the first book blogger I met in person, AND the first person to ask me for my autograph (although it was for Kelsey, but I’m still counting it!). So pretty much, Sarah rocks!!!
Posted by Sarah Woodard at 1:27 AM