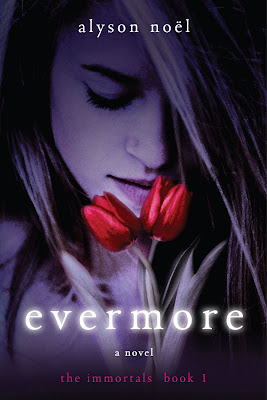 Rating(New and Improved hopefully):
Characters: 17/20
Setting: 8/10
Plot: 18/20
Originality: 17/20
Writing: 17/20
Recommendation: 8/10
Overall: 85/100 or B+
Sixteen year old Ever Bloom, has had a near death experience, in which she lost her parents, little sister, and dog. Now she can see auras, hear other's thought, and know every secret from a touch. She talks to her dead younger sister on a regular basis. She hides in baggy clothes, sunglasses, and an ipod. Until Damon Auguste enters the picture.
Damon is gorgeous, mysterious, and the only one that can block out all the psychic energy that she has been trying to avoid. Underneath it all, Ever thinks that he is hiding something. He doesn't have an aura (Only dead people don't have one), she can't read his thoughts, and he seems to be hiding a secret. The only thing that Ever is sure about is that she is falling for Damon, and she is falling hard.
I really enjoyed this book. It was a quick read and fairly addicting. Ever was really interesting and seemed pretty realistic. A problem that I had is that she would be sad about her parents and feel guilty, but it wasn't always present. That type of guilt would be a part of your skin and wouldn't be so random. I also had a problem with the Bella-like falling for a guy and the fact that Damon didn't seem to have any real bad characteristics. It was like "He is so hot, but I don't know anything about him..." I am crossing my fingers and hoping that will be solved in the next book. I loved Riley, she was a nice dose of humor even though she was dead.
I want to know more about Damon and Ever's powers, and I hope that it happens in the next book. I really like Noël's writing style. It made me want to read her books, because I have only read Saving Zoë. I think that it is a great start for a series. I have quite a few questions and hopefully those get answered. If you want a book about lost, love, and a touch of the Paranormal, you should enjoy this.
Peace out, Sarah
PS: I changed the rating system, because I felt that I was overrating sometimes on the 5 star system.
Posted by Sarah Woodard at 9:46 PM