Back When You Were Easier to Love by Emily Wing Smith 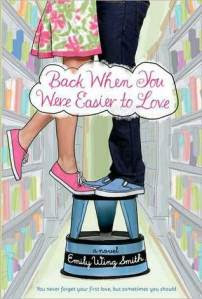 Source: Publisher
What's worse than getting dumped? Not even knowing if you've been dumped. Joy got no goodbye, and certainly no explanation when Zan—the love of her life and the only good thing about stifling, backward Haven, Utah—unceremoniously and unexpectedly left for college a year early. Joy needs closure almost as much as she needs Zan, so she heads for California, and Zan, riding shotgun beside Zan's former-best-friend Noah.
Original and insightful, quirky and crushing, Joy's story is told in surprising and artfully shifting flashbacks between her life then and now. Exquisite craft and wry, relatable humor signal the arrival of Emily Wing Smith as a breakout talent.
This book is hard to explain, because I absolutely loved it and so much happened in this book. Joy was obsessed with her ex-boyfriend Zan. I hated that he had so much power over her and that she wouldn't let him go. I hated that she tried to change herself for him and the fact that she couldn't see how amazing she was to begin with. I liked that through out the book, she finally realized that she was better then Zan. I also liked that this book did touch on Joy's Mormon beliefs, but it didn't force it down your throat. The Joy at the end of book is a new person and I felt that it was perfect for the story. I adored Noah and he was an awesome guy that I really appreciated to see in Young Adult Fiction. I liked that he also had problems and wasn't the perfect guy that he seemed and had his own issues that he was dealing with. Zan was such a jerk. I love the plot. There were a lot of the surprises on the way and who doesn't love a road trip. This was a really original book with amazing characters and a fun plot. Emily Wing Smith surprised me with this treasure of a read. I highly recommend that you read this book.
Posted by Sarah Woodard at 12:29 AM

Labels: Back When You Were Easier to Love, Emily Wing Smith, Review