This is a In My Mailbox, started by The Story Siren. Check it out here. 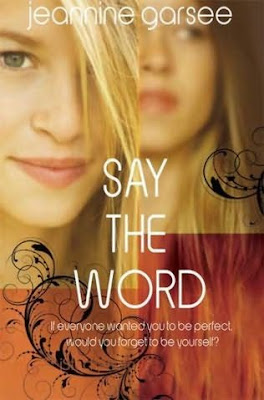 Say the Word by Jeannie Garsee
The world expects perfection from seventeen-year-old Shawna Gallagher, and for the most part, that's what they get. She dates the right boys, gets good grades, and follows her father's every rule. But when her estranged lesbian mother dies, it's more than perfect Shawna can take. Suddenly, anger from being abandoned ten years ago is resurfacing along with Shawna's embarrassment over her mother's other family. As she confronts family secrets and questions from the past, Shawna realizes there's a difference between doing the perfect thing and doing the right thing.
Shawna's honest and reputable voice will draw readers in and hold them until the last page in this coming-of-age story. Jeannine Garsee has delivered a compulsively readable second novel, perfect for fans of Sarah Dessen and Laurie Halse Anderson.
I was so excited for Say the Word. So, when I got it in the mail and did a little happy dance. Since I read Before, After, and Somebody in Between, I have been waiting for more by Jeannie Garsee. I have already read it and loved it very much. I really love this cover too. It is so pretty. 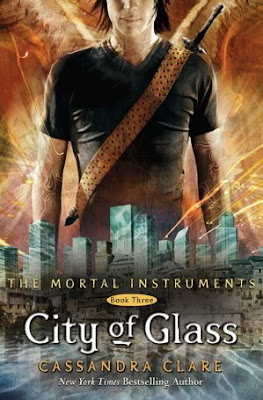 City of Glass by Cassandra Clare
To save her mother's life, Clary must travel to the City of Glass, the ancestral home of the Shadowhunters -- never mind that enter-ing the city without permission is against the Law, and breaking the Law could mean death. To make things worse, she learns that Jace does not want her there, and Simon has been thrown in prison by the Shadowhunters, who are deeply suspicious of a vampire who can withstand sunlight.
As Clary uncovers more about her family's past, she finds an ally in mysterious Shadow-hunter Sebastian. With Valentine mustering the full force of his power to destroy all Shadow-hunters forever, their only chance to defeat him is to fight alongside their eternal enemies. But can Downworlders and Shadowhunters put aside their hatred to work together? While Jace realizes exactly how much he's willing to risk for Clary, can she harness her newfound powers to help save the Glass City -- whatever the cost?
Love is a mortal sin and the secrets of the past prove deadly as Clary and Jace face down Valentine in the final installment of the New York Times bestselling trilogy The Mortal Instruments.
I love this series so much. So, I bought this the day it came out and was so excited to read. I highly encourage anyone to read this series. 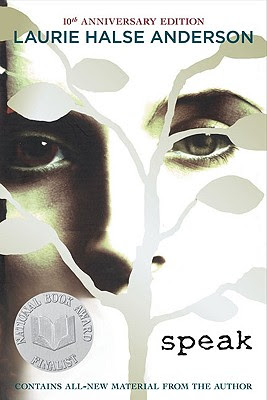 Speak by Laurie Halse Anderson
Since the beginning of the school year, high school freshman Melinda has found that it's been getting harder and harder for her to speak out loud: "My throat is always sore, my lips raw.... Every time I try to talk to my parents or a teacher, I sputter or freeze.... It's like I have some kind of spastic laryngitis." What could have caused Melinda to suddenly fall mute? Could it be due to the fact that no one at school is speaking to her because she called the cops and got everyone busted at the seniors' big end-of-summer party? Or maybe it's because her parents' only form of communication is Post-It notes written on their way out the door to their nine-to-whenever jobs. While Melinda is bothered by these things, deep down she knows the real reason why she's been struck mute...
Laurie Halse Anderson's first novel is a stunning and sympathetic tribute to the teenage outcast. The triumphant ending, in which Melinda finds her voice, is cause for cheering (while many readers might also shed a tear or two). After reading Speak, it will be hard for any teen to look at the class scapegoat again without a measure of compassion and understanding for that person--who may be screaming beneath the silence.
I love this book. I met Laurie Halse Anderson and decided to buy a book for a contest. 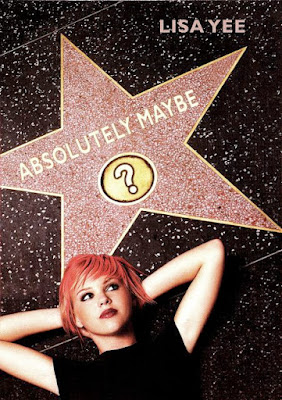 Absolutely Maybe by Lisa Yee
Maybe (short for Maybelline, her mother’s favorite mascara brand) wears oversize men’s T-shirts, uses lots of black eye makeup, and rejects everything girly—which is probably a reaction to her mother’s charm school and impending seventh marriage. This latest husband-to-be is the worst yet, and when he attempts to rape Maybe (in a scene that is realistic but not explicit), she and her friend Ted decide to join their buddy Hollywood when he moves to California for film school. Maybe’s stated goal is finding her biological father, but as she runs out of money and hope, that goal changes to finding herself. Despite the heavy topics, this is a breezy read populated with friendly characters and sunny serendipity: Maybe is welcomed into the home of an ex-stepdad, Ted, finds work as an assistant to a movie star, and Hollywood aces his first film. When your starving protagonist spends her only five dollars on eyeliner, the intended audience is obvious; for those readers, Maybe’s ugly duckling–type transformation will be predictable but pleasing.
I got this from Bookmooch and I really like the cover. It also sounds really good. 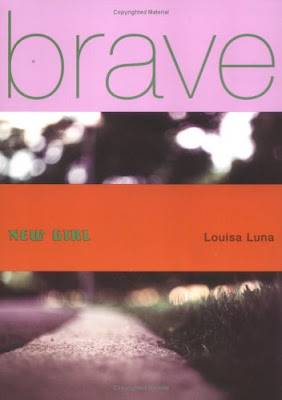 Brave New Girl by Louisa Luna
Angry and alienated teens seem to be growing ever younger. Doreen, the protagonist of this disturbing coming-of-age novel, is only 14. But in her anomie and hatred of her family, she puts Holden Caulfield in the shade. Like Holden, she tells the story in sarcastic first-person, which is often scalding in its use of expletives (at one point the f word appears 63 times in one and on-half pages), but still manages to be oddly artful in its consistency and voice. Despite her tough talk and her tendency to self-pity, Doreen gradually grows into a complex, intriguing character. Her affection for another young outsider, her only friend, Ted, is touching; her longing for her older brother, whom her father kicked out of the house when she was a girl, is haunting; and her confused feelings for her older sister's boyfriend are absolutely credible. When he sexually abuses her, readers share her pain, confusion, and despair. The ending to this difficult story is surprisingly hopeful and emotionally satisfying, if not entirely believable. This was published for adults, but it's clearly for teens--though it will best suit those readers mature enough to embrace its attitudes and edginess.
I have already read this book and really like it. So, that is why I got it from Bookmooch. So, I am excited to own this now. 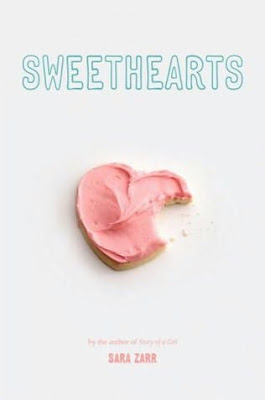 Sweethearts by Sara Zarr
As children, Jennifer Harris and Cameron Quick were both social outcasts. They were also one another's only friend. So when Cameron disappears without warning, Jennifer thinks she's lost the only person who will ever understand her. Now in high school, Jennifer has been transformed. Known as Jenna, she's popular, happy, and dating, everything "Jennifer" couldn't be---but she still can't shake the memory of her long-lost friend. When Cameron suddenly reappears, they are both confronted with memories of their shared past and the drastically different paths their lives have taken. Sweethearts is a story about the power of memory, the bond of friendship, and the quiet resilience of our childhood hearts.
I really liked this book and wasn't expecting it at all. So, I was really excited to find this book. I really loved it, when I got it from the library. So to own it, is super awesome. I adore this cover it is so cute. It makes me want to go bake some cookies and send them out. 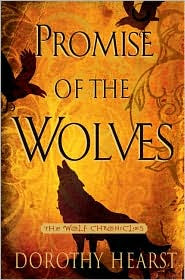 Promise of the Wolves by Dorothy Hearst
At least that's what the wolves of the Wide Valley believe. Until a young wolf dares to break the rules -- and forever alters the relationship between wolves and the humans who share their world.
This is the story of such a wolf. Born of a forbidden mixed-blood litter and an outcast after her mother is banished, Kaala is determined to earn a place in the Swift River pack. But her world is turned upside down when she saves a human girl from drowning. Risking expulsion from their pack and exile from the Wide Valley, Kaala and her young packmates begin to hunt with the humans and thus discover the long-hidden bond between the two clans. But when war between wolves and humans threatens, Kaala learns the lies behind the wolf 's promise. Lies that force her to choose between safety for herself and her friends and the survival of her pack -- and perhaps of all wolf- and humankind.
Set 14,000 years ago, Promise of the Wolves takes us to a land where time is counted in phases of the moon, distance is measured in wolflengths, and direction by the scent of the nearest trail. Years of research into the world of wolves combines with mythical tale-telling to present a fantastical adventure set in a world filled with lore.
I got this from Pulse It and I am not sure if I will like this book. I am going to try to read it soon...
So that is what I got this week. I am excited for the books and can't wait to read the books, that I haven't
Peace out, Sarah.
Posted by Sarah Woodard at 2:16 PM