The Candidates by Inara Scott 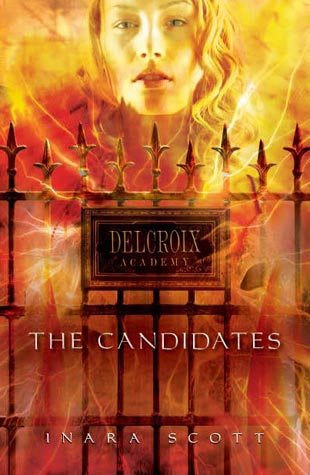 Source: Bought
Dancia Lewis is far from popular. And that's not just because of her average grades or her less-than-glamorous wardrobe. In fact, Dancia's mediocrity is a welcome cover for her secret: whenever she sees a person threatening someone she cares about, things just...happen. Cars skid. Structures collapse. Usually someone gets hurt. So Dancia does everything possible to avoid getting close to anyone, believing this way she can suppress her powers and keep them hidden.
But when recruiters from the prestigious Delcroix Academy show up in her living room to offer her a full scholarship, Dancia's days of living under the radar may be over. Only, Delcroix is a school for diplomats' kids and child geniuses--not B students with uncontrollable telekinetic tendencies. So why are they treating Dancia like she's special? Even the hottest guy on campus seems to be going out of his way to make Dancia feel welcome.
And then there's her mysterious new friend Jack, who can't stay out of trouble. He suspects something dangerous is going on at the Academy and wants Dancia to help him figure out what. But Dancia isn't convinced. She hopes that maybe the recruiters know more about her "gift" than they're letting on. Maybe they can help her understand how to use it...But not even Dancia could have imagined what awaits her behind the gates of Delcroix Academy.
The premise of The Candidates was really exciting. I liked the idea of everyone having the ability to have gifts, it was properly developed, which is where Delcroix comes in. Danica was easy to relate to and very sweet. I really liked Jack. He was a very funny and awesome character. He was also a bad boy, which is hot. Cam was very clean cut and his support of Delcroix, got annoying at times. Danica's grandmother was such an awesome lady. She was so funny and supportive of Danica, which was amazing. The plot of The Candidates was slow at times, but it definitely picked up and became addictive. There was a lot of background information that I am sure that book 2 will be twice as entertaining. This book was really original. Scott made unique characters and plot lines. I also loved that it was set in the Pacific Northwest. I would recommend this to fans of paranormal romance.
Posted by Sarah Woodard at 12:37 AM