When the Stars Go Blue by Caridad Ferrer 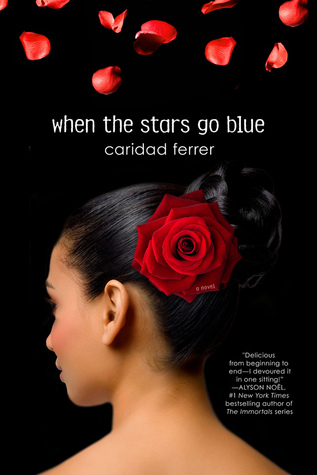 Rating:
Characters: 18/20
Plot: 17/20
Originality: 19/20
Writing: 19/20
Recommendation: 18/20
Overall: 91/100 or A
Source: Publisher
A dancer driven to succeed.
A musical prodigy attempting to escape his past. The summer they share.
And the moment it all goes wrong.
Dance is Soledad Reyes’s life. About to graduate from Miami’s Biscayne High School for the Performing Arts, she plans on spending her last summer at home teaching in a dance studio, saving money, and eventually auditioning for dance companies. That is, until fate intervenes in the form of fellow student Jonathan Crandall who has what sounds like an outrageous proposition: Forget teaching. Why not spend the summer performing in the intense environment of the competitive drum and bugle corps? The corps is going to be performing Carmen, and the opportunity to portray the character of the sultry gypsy proves too tempting for Soledad to pass up, as well as the opportunity to spend more time with Jonathan, who intrigues her in a way no boy ever has before.
But in an uncanny echo of the story they perform every evening, an unexpected competitor for Soledad's affections appears: Taz, a member of an all-star Spanish soccer team. One explosive encounter later Soledad finds not only her relationship with Jonathan threatened, but her entire future as a professional dancer.
Through out the whole book, I could clearly feel that Soledad was just telling me this story. Her passion for dancing is similar to my passion for reading and writing, which made it so that I could connect to her. I could picture the scene and her action from the rich details each dance and emotion. She was such a strong and powerful character and I really appreciated that she was thinking about her future and not just about the present. Her romance with Jonathon is very important to the plot, as is her portrayal as Carmen for the drum and bugle corps. Jonathon seemed really sweet at the beginning, but Jonathon quickly became plagued with jealously. Their love seemed like us versus the world invincibility that a lot of first romance have. I also realized how troubled Jonathon really was. His love for Soledad wasn't healthy and it seemed like he was constantly questioning her feelings. He wasn't a bad person, he was just lost, because his relationship with Soledad was the first time that he was able to make choices. I adored Taz. He was such a funny and caring character and brought a lot to this story.
I really loved the drum and bugle crops part of this book. I knew just enough about it to understand the pressure that was on all of the characters and also didn't feel an information overload. It was awesome to see the dedication that people put into this sport and also how clique arise when you put teens together. I really enjoyed how original this book was. I haven't read a book like this in forever. The romance was so intense and consuming to the story and I loved it. The future aspect of the book was also fantastic, because that is what I am dealing with at the moment and few books are older YA. Ferrer is an amazing writer and I am so excited to read her next book. I would highly recommend this book to fans of Jenniefer Echols and Sarah Dessen. If you plan to read this, I would take a moment to just read about Carmen, because it will add depth to the story.
Posted by Sarah Woodard at 12:11 AM

Labels: A, Caridad Ferrer, Review, When the Stars Go Blue