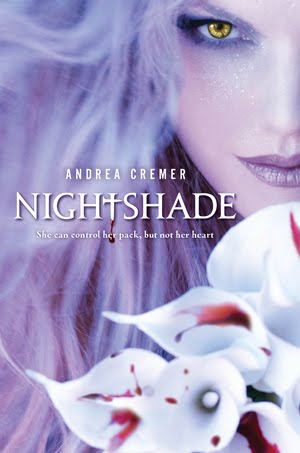 Rating:
Characters: 18/20
Plot: 19/20
Originality: 18/20
Writing: 19/20
Recommendation: 19/20
Overall: 93/100 or A
Source: Publisher
Calla Tor has always known her destiny: After graduating from the Mountain School, she'll be the mate of sexy alpha wolf Ren Laroche and fight with him, side by side, ruling their pack and guarding sacred sites for the Keepers. But when she violates her masters' laws by saving a beautiful human boy out for a hike, Calla begins to question her fate, her existence, and the very essence of the world she has known. By following her heart, she might lose everything— including her own life. Is forbidden love worth the ultimate sacrifice?
I really enjoyed Nightshade. Calla had such a strong backbone, but she also cared for others. I could also relate to her down-to-earth personality. Ren was the typical bad boy, but I could tell that he had genuine feelings for Calla. I really liked the banter that Ren and Calla had back and forth, it reminded me of the banter in Old Hollywood films, which I love. Shay was such a sweetie and had some mystique at the beginning, but secrets slowly unraveled and I found myself liking him more. The plot was really engaging. I found myself intensely drawn into Nightshade. The romances were very sweet and well developed. The action was also well written. This book isn't like most werewolf books, it had a twist which made it more intriguing. Cremer's writing was really well developed. I found myself drawn into her world and I really enjoyed it. I highly recommend this book to anyone that enjoys Paranormal Romance and is looking for something new.
Posted by Sarah Woodard at 12:57 PM