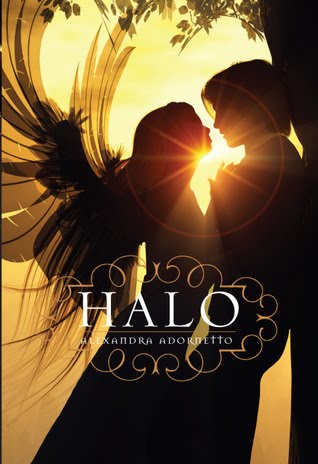 Rating:
Characters: 13/20
Plot: 15/20
Originality: 17/20
Writing: 16/20
Recommendation: 15/20
Overall: 78/100 or C
Source: Publisher
Nothing much happens in the sleepy town of Venus Cove. But everything changes when three angels are sent from heaven to protect the town against the gathering forces of darkness: Gabriel, the warrior; Ivy, the healer; and Bethany, a teenage girl who is the least experienced of the trio. They work hard to conceal their true identity and, most of all, their wings. But the mission is threatened when the youngest angel, Bethany, is sent to high school and falls in love with the handsome school captain, Xavier Woods. Will she defy the laws of Heaven by loving him? Things come to a head when the angels realize they are not the only supernatural power in Venus Cove. There′s a new kid in town and he′s charming, seductive and deadly. Worst of all, he′s after Beth.
I was really excited for Halo, when I heard the premise. Sadly it didn't live up to my expectation. My main problem was the characters and the over drawn out plot. Bethany didn't seem to have any personality, after she see Xavier that is all that she talks about. She also doesn't seem to really having an interests. Her bother and sister, Gabriel and Ivy are very dry and didn't really bring anything to the story. Xavier on the other hand, has had a hard last few years, but it didn't really seem to effect him as it should have. He also tried to protect Bethany by her siblings instruction, who is the supernatural being. That is just ridiculous.. Seriously, you have to have a guy to protect, even if you are an angel. That was just way over the top for me. Her friend Molly was also boring and brought little to the story. I also didn't understand exactly why Bethany and her were friends. The only character that actually in liked in this book was the bad guy. He had a personality and actually believed that Bethany could protect herself, unlike everyone else in the book.
The plot was also extremely slow and also very predictable. The details were over the top and I felt that it could have been edited down. The plot doesn't start till past page 300. Before that it is just about romance and school, which I didn't find entertaining. Can I also say that this book was very cheesy? I found myself laughing at what were suppose to be serious or intimate moments. I did find parts of the plots intriguing, but there wasn't nearly enough. The concept was very original, but the execution left a lot to be desired. It seemed like almost every other paranormal book that I have read. Adornetto has a basis for becoming a great writer. She has a keen eye for detail and can make a stunning scene. My biggest problem was that it wasn't edited down enough. I would recommend this book to fans of Twilight, because it has a lot of similarities. I am sort of excited for the sequel Hades, because I can see a glimpse of what could be a decent book
Posted by Sarah Woodard at 2:18 PM