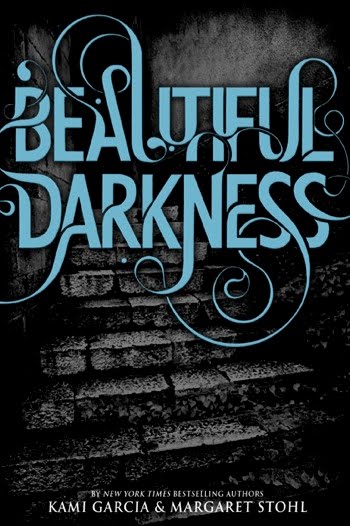 Rating:
Characters: 17/20
Plot: 16/20
Originality: 18/20
Writing: 19/20
Recommendation: 18/20
Overall: 88/100 or B
Source: Publisher
Ethan Wate used to think of Gatlin, the small Southern town he had always called home, as a place where nothing ever changed. Then he met mysterious newcomer Lena Duchannes, who revealed a secret world that had been hidden in plain sight all along. A Gatlin that harbored ancient secrets beneath its moss-covered oaks and cracked sidewalks. A Gatlin where a curse has marked Lena's family of powerful supernaturals for generations. A Gatlin where impossible, magical, life-altering events happen.
Sometimes life-ending.
Together they can face anything Gatlin throws at them, but after suffering a tragic loss, Lena starts to pull away, keeping secrets that test their relationship. And now that Ethan's eyes have been opened to the darker side of Gatlin, there's no going back. Haunted by strange visions only he can see, Ethan is pulled deeper into his town's tangled history and finds himself caught up in the dangerous network of underground passageways endlessly crisscrossing the South, where nothing is as it seems.
I really enjoyed Beautiful Creatures, and had huge expectation for Beautiful Darkness. There were a few things that I loved and a thing or two that I didn't. It picks right up where the last book ended. Lena and Ethan are still star crossed lovers that can't be together for obvious reasons. Lena is a Castor and Ethan isn't. I didn't feel that the characters developed as much as I would like. Lena seems to be come childlike and lost into a pit of darkness, because all that she can feel is the darkness. Ethan tries to assure her that it will passed. Instead a huge wedge is formed between them and their relationship seems to slowly crumble. This play a great part in the actions of Lena and Ethan. Link and Ridley returns and they bring in a comedic effect to the book and also both developed a lot. The Sisters, Amma, and Marian the Librarian return. Along with plenty of new characters, such as Liv, who is fantastic. There were a few characters that weren't developed as I hoped.
The plot of Beautiful Darkness was full of so much information. A few times, I felt a little overwhelmed with all the information that came at one time and also the pacing was all over the place. I felt that parts of it could have been shortened, because it was so slow at times. It felt like it could have been simplified. I did like how original it was. I love the Castor world and how unique it is. I honestly can't compare it to any book. Stohl and Garcia are stunning writers. It blends so well together. I am sure that you would love this book, if you liked Beautiful Creatures. I enjoyed it despite my complaints.
Posted by Sarah Woodard at 11:56 PM